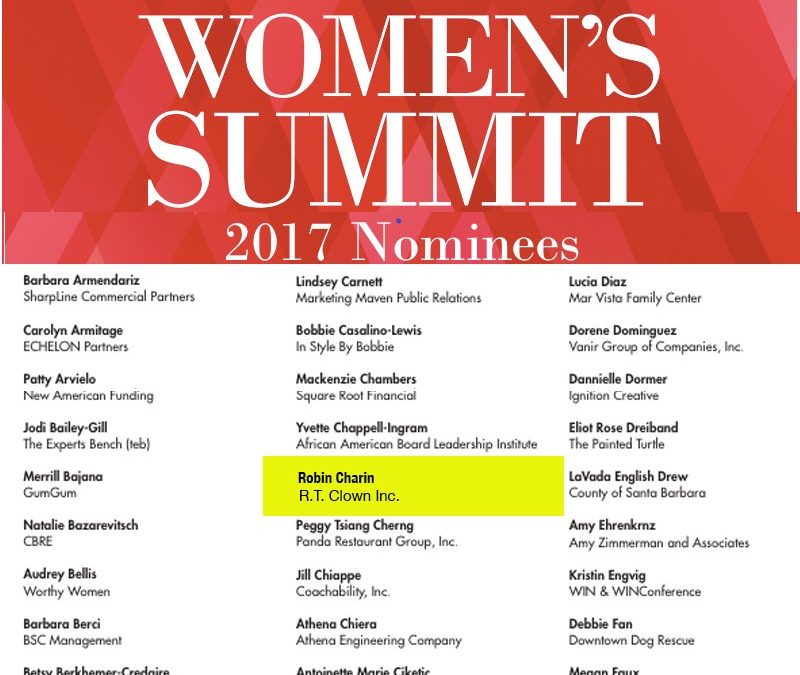 Robin Charin, CEO of Manhattan Beach’s R.T. Clown Inc., was recently recognized as one of Los Angeles’ most inspirational women business leaders by The Los Angeles Business Journal. The nomination was part of the newspaper’s 2017 Women’s Summit & Awards event, and was held at the JW Marriott Los Angeles.

According to Los Angeles Business Journal CEO and Publisher, Anna Magzanyan, this year’s event was the 25th anniversary of the annual ceremony that honors dynamic and successful business women throughout Los Angeles County.

“It was an uplifting and inspirational event that honored Los Angeles-based women who really lead by example. All of the nominees successfully blend effective business vision with a passionate commitment to positively making a difference, both in the world of business and in the communities they serve,” said Magzanyan.

According to Magzanyan, more than 100 prestigious women nominees were submitted for the honor by Los Angeles Business Journal readers.

“It was a tremendous honor to be nominated. I started my business back in 1985 as a single woman because I knew I could run an event planning business better than others I saw in business. I was also broke, so I borrowed $1,000 from my father, and bought a clown outfit and Care Bear costume. I paid him back within one month from my profits. The business took off immediately,” said Robin.

Robin, who started her career as a Broadway musical performer and actress, thoroughly understood the business of entertainment and Hollywood. She forged a deep network of professional actors and performers whom she could regularly call upon to perform at events that ranged from children’s birthday parties to large office holiday parties. Her list of clientele is also impressive, including Hollywood stars as Barbara Streisand and Tobey Maguire, and prestigious corporations like United and Delta Airlines, the Ritz-Carlton and Marriott International hotels. Robin also carved out a unique niche as the go-to source for real-bearded Santas.

Being recognized as one of Los Angeles’ most successful woman business entrepreneurs was a nice honor, but Robin thinks the award represents something bigger.

“Starting a business is hard enough, but to create a company within the male-dominated entertainment industry is especially difficult. I think all women-owned businesses are special, and I think I am fortunate that I moved west to a city and state that encouraged and supported women-owned businesses,” said Robin.

“Being recognized as a professional woman entrepreneur by the Los Angeles Business Journal really helped me take a step back, and think about my business. I’ve been doing this for 32 years, produced more than 35,000 events since I started. Not bad for actress-singer who moved well,” said Robin.