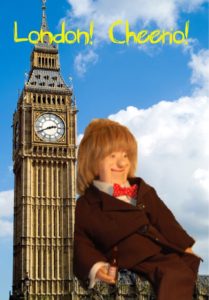 “JayЯ” has been a core member of R.T. Clown Inc.’s team since 2001. While he was consummated in Atlanta (actually, he was constructed), JayЯ had a hard time adjusting to life down South. He said it was too hot, too humid, and too hard to understand people. So when he was just 13, JayЯ moved to The Windy City of Chicago to pursue life as an actor and straight man. As it happened, Robin Charin, founder of R.T. Clown and her husband, Mark were passing through Chicago at the same time. The three met during the Chicago Costume and Halloween Show, and hit it off right away. Since JayЯ had always wanted to visit California, and Robin’s business was headquartered in Manhattan Beach, the three decided to form a team…a family if you will. JayЯ likes to say “the winds of fortune seemed to be blowing at my back.” Robin said it wasn’t fortune that was blowing, it was more like a blast of cold air off of Lake Michigan.http://rtclown.com/

Anyway, we recently had an opportunity sit down with JayЯ, and interview him. We thought you might enjoy reading some of his answers. So here goes…

What’s Your Favorite Place in the World?

Wow! That’s a hard one. You know, I’ve met penguins in Antarctica, danced to Mariachi music in Mexico, and drank a pint of Guinness with my mates in a London pub while watching a great football match. But really, I’m a California dude. It’s all about the energy for me, and there is no better energy than in Manhattan Beach, California.

To watch or to play?

What are you an idiot? I’m a wood, vinyl American! Now if you asked me what my favorite activity is, I’d have to say getting my beach blond surfer hair coifed by one of those beautiful, California blond stylists, and quaffing my favorite beer on the beach. Did you see what I did there?

If You Could Be Anything Other Than a Dummy, What Would You be?

You know, I never have liked that word. It sounds so demeaning. I am not a ‘dummy’. Think of me as a thespian with multiple personalities. I was made to perform…literally. But I have no act.

If You Had a Superpower, What Would It Be?

My superpower would be to live my life as a man, with skin and bones and a heart. I think the Columbian Nobel Prize winning writer, Gabriel García Márquez described this desire for human power in his poem, “La marioneta.” Let me quote some of it to you:

If I had a piece of life, I would dress simply, throw myself face up unto the sun, bearing not only my body, but also my soul. God, if I had a heart, I would write all of my hate on ice, and wait for the sun to come up. I would paint with a Van Gogh dream upon the stars a Benedetti poem and a Serrat song would be my serenade to the moon. I would water the roses with my tears, to feel the pain of their thorns, and the incarnate kiss of their petals…

I told you I was made to perform.