How R.T. Clown Inc. Fell For Its Company Mascot, “JayЯ” 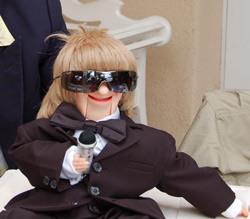 Did you know that R.T. Clown Inc.’s mascot, “JayЯ” is a rock star in Australia, has his own bumper sticker affixed to Southern California cars, and has accumulated more than 50,000 followers on both Facebook and Twitter? And if you ever visit the Manhattan Beach headquarters of R.T. Clown, you will see JayЯ sitting at his own desk.

According to a recent article in Entrepreneur magazine, mascots can be incredibly effective marketing tools. They act as characters and spokespeople that endorse any company or product on a very personal level. Even more interesting, mascots have been found to be more memorable than celebrities when it comes to product endorsement.

“We really wanted a mascot to represent our company, R.T. Clown Inc., and one day my husband, Mark and I found a ventriloquist dummy that we both just fell in love with. We added some hair, created a wardrobe for him, and included him in most all of our events. Over the years, JayЯ has become an important member of our team. But even more interesting is that JayЯ has also become a kind of miniature version or alter ego of my husband,” said Robin Charin, CEO of R.T. Clown Inc. “We always hoped the dummy would make us money, but he hasn’t so far,” quipped Robin.

Because Robin was also once a Broadway musical performer, she thoroughly understands the business of entertainment, and relates to the world as performing artist. So when she met JayЯ in 2001, she immediately incorporated the mascot into R.T. Clown’s marketing plan. Actually, she even incorporated JayЯ into her life.

“JayЯ has been around the world. He’s been to Antarctica, Mexico, England, France and Germany. He’s even been to the Czech Republic, Austria, Argentina and Chile. Believe it or not, he’s very popular everywhere he goes,” said Robin.

She explained that incorporating a mascot into an event planning business that specializes in entertainment themed parties is really a natural fit.

“If you think about it, mascots are everywhere. They are associated with sporting teams and schools. Who doesn’t love the Geico gecko or the Aflac duck? JayЯ is as big as those mascots, and actually has a celebrity fan page that’s worth checking out. I think he’s got a very bright future,” said Robin.

Read Our Exclusive Interview with “JayЯ”